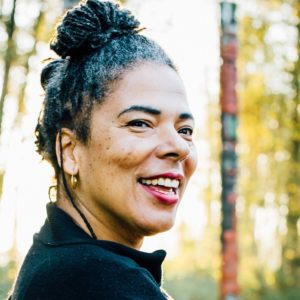 Vanessa Richards, born in Vancouver, works as an artist and facilitator. Her practices encourage the personal and civic imagination towards positive social change and sustainability.

Since the 1990’s she has been devising and delivering arts-based engagement, education and programming through collaboration with community programmes, universities, unions, cultural organizations, health care providers, and projects that serve the imaginations of young people and elders.

As a community choir leader she also brings collective singing to conferences and gatherings to connect ideas, emotions and people. Her poetry and critical works are anthologized in the UK, Holland, United States and Canada. As a performer she has been nominated for a Jesse Richardson Theatre Award.

She is on the advisory committee for the RADIUS Fellowship at Beedie School of Business SFU and a producer/facilitator for the Social Venture Institute with Hollyhock Leadership Institute. For many years Richards served as a volunteer on the City of Vancouver Black History Month Advisory Committee as well as the Hogan’s Alley Working Group and Society. She is currently a volunteer mentor for two youth co-operatives, Ethọ́s Lab and Solid State. For her work in community engagement Richards was the recipient of the 2018 City of Vancouver’s Mayor’s Achievement Award.