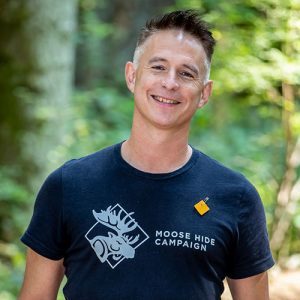 Paul Lacerte is a member of the Nadleh Whut’en Band and belongs to the Carrier First Nation in northern BC. He is a traditional cultural practitioner and spends as much time as possible in his home Carrier territory, learning, laughing, hunting, and gathering. In 2011, Paul and his daughter Raven co-founded the Moose Hide Campaign, a grassroots movement of Indigenous and non-Indigenous men working to end violence against women and children. Since then, over 3 Million Moose Hide pins have been distributed and the Campaign has spread to over 2,500 communities and organizations across Canada and the US.

Paul is a Founding Managing Partner with Raven Indigenous Capital Partners (the first Indigenous owned financial intermediary in Canada), the former Vice-Chair of the Vancouver Foundation Board of Directors, a former foster parent, an adoptive parent, the former Board Chair for Reconciliation Canada, and a former representative to the United Nations Permanent Forum on Indigenous Issues. He was awarded the Order of British Columbia in 2014. He is also a practicing magician and a sub-average hockey player.