Back to All Posts

I’m on the trail to Cold Mountain.
Cold Mountain trail never ends.
Long clefts thick with rock and stones,
Wide streams buried in dense grass.
Slippery moss, but there’s been no rain,
Pine trees sigh, but there’s no wind.
Who can leap the world’s net,
Sit here in the white clouds with me?

We are the aspirations of our ancestors. It is amazing to think of all the human moments it took over the course of history to have us living right now – migrations, love, war, innovation. Our ancestors are always with us, standing with us, whether we like it or not. Our blood is their blood, our thoughts are their thoughts, our suffering is their suffering. But what does it mean for an organization to have ancestors? How are organizations fundamentally shaped (culturally, financially, socially) by the people who came before us? What is our responsibility to them?

Richard Weaver carved the Cold Mountain Institute out of the forest by the sheer force of his will. He was not alone, but he held the vision and he held it tightly. Weaver was a powerful man. In conversation with some of the remaining people who were involved with Cold Mountain (Judyth Weaver, Martha Abelson, David Rousseau, Eric Stine) which operated between 1970 – 1976, a poignant picture of a charismatic founder unfolds.
A number of the details of Weaver’s life remain unclear (although we continue to investigate) but we know that Weaver (an American) dropped out of high school and fought in the Pacific in World War 2. Upon returning to North America, Weaver became a logger and miner and developed an interest in the pop-Buddhism made popular by Alan Watts and Gary Snyder. By the mid 1960s, he was at the University of Alberta teaching and working on a Ph.D focused on T.S. Elliot and Buddhist Philosophy.
With a proper disdain of a career in academia, Weaver ended up at Esalen Institute where he met Fritz Perls, the founder of Gestalt Therapy, and this had a huge impact on him. John Gray, a writer who had met Richard Weaver at Cold Mountain, wrote in Vancouver Magazine in 1983 (years after Weaver had died and Cold Mountain had collapsed) “He was not keen on the change from chauk-dusted gowns to input and infrastructure, but he didn’t know what he could do about it until he visited Esalen Institute in Big Sur, California at the height of the Fritz Perls era. Esalen was the flagship of the Human Potential Movement of the 1970s. For Weaver, this was it. Teaching people to define their own lives, to be their own teachers, to learn directly from the world, to examine their own lives.”

By the time Richard left Esalen and was on Cortes Island, he was a man on a mission. He wanted to create something real, something big, and something that would change the world. For six years he was the driving force and the creative energy behind Cold Mountain. Cold Mountain programming was a mix of Gestalt therapy, encounter groups, with a sprinkling of Buddhism. John Gray describes an opening session at Cold Mountain, “In the Cedar Teepee we listened to Weaver’s opening remarks. They were maddeningly simple, along the lines of ‘Look, all this is about is honesty and responsibility. Honesty means admitting to what is. Responsibility means not blaming it on anybody else.” Cold Mountain welcomed hundreds of people seeking this form of honesty and connection throughout the early 1970s and Weaver was at the centre.

Richard Weaver died suddenly at the age of 45 in 1975. Apparently he had a heart attack while eating dinner in Vancouver. Jean Weaver, his wife and chief organizer, administrator and backbone of Cold Mountain, attempted to continue to run the Institute. Without the charisma of Richard, it soon fell apart. Gone to the winds of history. But not really gone.

So many aspects of Hollyhock owe their existence to Weaver’s vision. Kiakum, Raven, Carousel, the orchard cabins – all of these buildings were imagined, named, and constructed under his watchful eye. Kiakum was built in 1970-71, started by a man named John LeBaron from Denman Island and was finished by David Rousseau. Carousel was also designed and built by Rousseau. Raven and the Orchard cabins were built by Eric Stine in 1972-73. So many of the cultural pieces were also part of Weaver’s vision: taking our shoes off in the lodge (which is strange when you think about it – how many restaurants do you remove your shoes in?); vegetarian food (although Weaver himself ate meat); Buddhas sprinkled throughout the property (which is actually outside of the no-dogma, no guru ethos of both Cold Mountain and Hollyhock). 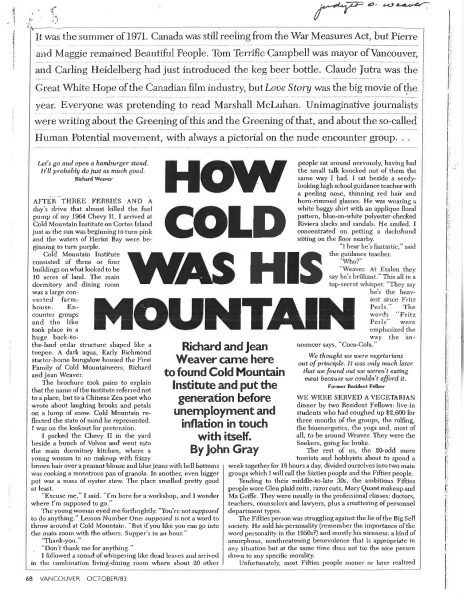 Our ancestors are never really far behind. We owe them gratitude for birthing us, persevering, and overcoming. Organizational ancestors are no different. Richard Weaver is gone; Cold Mountain is gone; but they continue to live through Hollyhock. Not the same, but not totally different. The trail from the past never ends.

I want to thank Judyth Weaver (who was married to Richard Weaver’s younger brother Ben Weaver), Martha Abelson, David Rousseau, Eric Stine for their generosity in helping us piece together the history of Cold Mountain. Thank you so much for your time, wisdom, excitement, and your memories. I also want to thank Odette Auger, Hollyhock’s Campus Support Coordinator, who shares my excitement for history and has been doing lots of unearthing.

Fill up with inspirational videos, insightful articles, and delicious recipes from our presenters, staff, and community.

The power of your genius

A commitment to deepen our climate action