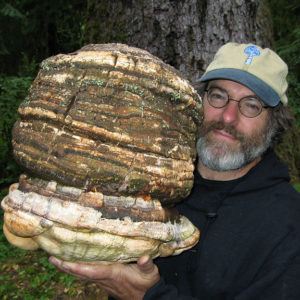 Paul Stamets, D.Sc (Hon.), is the founder of Fungi Perfecti and Host Defense Organic Mushrooms, and has been a dedicated mycologist of 40+ years. He has written six books and pioneered countless techniques in the field of edible and functional food mushroom cultivation. Two of his books, Growing Gourmet & Medicinal Mushrooms and The Mushroom Cultivator have been heralded as the ‘bibles’ of the mushroom industry. His latest book, Mycelium Running, How Mushrooms Can Help Save the World, has propelled to the world stage his vision of using mushrooms to help save ecosystems and improve population health.

Paul has received numerous awards and honours for his contributions to the science of medicinal mushrooms and ecology. His TED (2008) talk “How Mushrooms Can Help Save the World” has been rated in the top 10 of all TED talks, and viewed more than  5,000,000 times. His TEDMED (2011) introduced medicinal mushrooms to more than 800 physicians. In January of 2014, Paul received the highly acclaimed NAMA (North American Mycological Association, www.namyco.org) award for expanding the field of mycology for both amateurs and professionals. In June of 2014, Paul was chosen as an Invention Ambassador by the American Academy for the Advancement of Science (AAAS), the largest and most prestigious scientific organization in the world. This honour was in recognition of bridging scientific discovery, education, and applications for societal benefit. In July of 2015, Paul was awarded The Wasson Award from the Mycological Society of America (MSA), for expanding the field of mycology more than any mycologist in history. His influence has now flowed into popular sci-fi culture with his appointment as a science Starfleet officer, astromycologist Lt. Stamets (acted by Anthony Rapp), in the new Star Trek Discovery series.