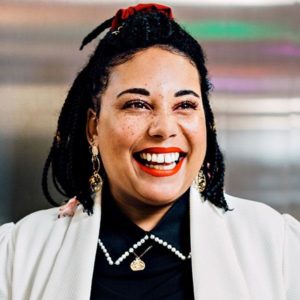 Cicely Belle Blain (they/them), CEO & Principal Consultant, founded Bakau Consulting (formerly Cicely Blain Consulting) in 2018 and has grown the company to serve over 1000 clients worldwide. Some of their most notable professional achievements include speaking at the United Nations Summit in Quito, Ecuador, developing an Intersectionality Toolkit for the City of Vancouver and presenting the keynote address for the 2020 graduating ceremony at University of British Columbia, their alma mater.

Cicely Belle is a Black/mixed, queer non-binary femme from London, UK now living on the lands of the Musqueam, Squamish and Tsleil-Waututh people. Their ancestry is a mix of Gambian (Wolof), Jamaican and English. Cicely Belle spent their formative years between London, the Netherlands and a small Catholic village in France – each home presenting a pivotal opportunity for awakening and growth. Cicely Belle is descended from a long line of feminist educators and developed a passion for justice from a young age.

Cicely Belle is noted for founding Black Lives Matter Vancouver and subsequently being listed as one of Vancouver’s 50 most powerful people by Vancouver Magazine twice, BC Business’s 30 under 30 and one of Refinery29’s Powerhouses of 2020.

Cicely Belle is also an instructor in Executive Leadership at Simon Fraser University, the Editorial Director of Ripple of Change Magazine and the author of Burning Sugar (Arsenal Pulp Press and VS Books, 2020).